About the K-9 Unit

The Beaverton Police Department maintains five K9 teams made up a handler and canine partner. All five dogs are trained for tracking and article searches, and two dogs are cross trained for both tracking and narcotic detection.

The police dogs are chosen for their superior ability to detect and locate persons, property, and evidence. They are trained and primarily used to track and locate persons that have fled on foot from crime scenes. However, the teams are also used for backing up other officers on alarm calls, in building searches, on fight calls, in locating lost or missing persons, and in conducting security checks of businesses.

One K-9 team has the potential to save the Department hundreds of work hours per year because of the dog’s keen auditory and olfactory senses. As such, these highly trained teams are a valuable resource to the Department. Beaverton Police Department’s teams are often called upon to assist other agencies.

The department has continued its partnership with the Oregon Police Canine Association (OPCA). This organization hosts training classes and seminars throughout the state to update agencies on laws and procedures dealing with the use of canines. The OPCA establishes minimum requirements for each canine team and recertifies teams once per year.

The K-9 teams offered demonstrations at numerous community events throughout the year, including neighborhood picnics, National Night Out, and the Beaverton Police Community Academy. The demonstrations provided attendees of all ages with insight on how canines are trained, and how the K-9 teams provide services to the community. 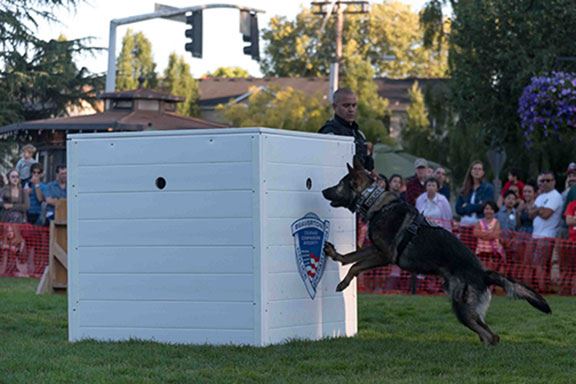